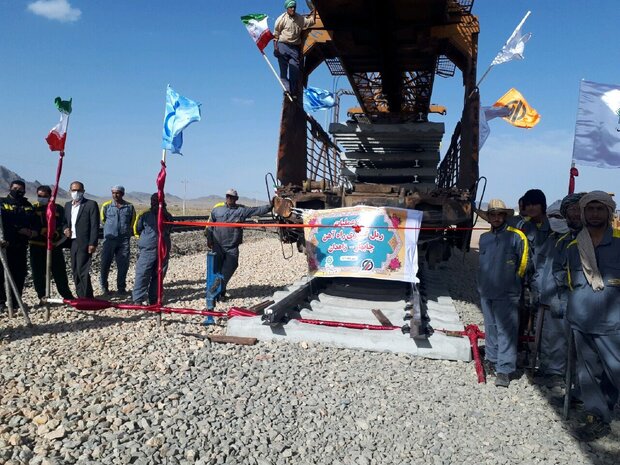 TEHRAN – The track-laying operations of Chabahar-Zahedan railroad was started on Tuesday in a ceremony attended by Iranian Transport and Urban Development Minister Mohammad Eslami and Deputy Transport Minister Kheirollah Khademi.

As reported by IRNA, the project which is aimed to connect Chabahar to Zahedan (the capital city of southeastern Sistan-Baluchestan Province) is planned to be completed by the end of the Iranian calendar year of 1400 (March 2022).

Speaking in the ceremony, Khademi noted that the total length of this railroad is 628 kilometers (km), 150 km of which will be laid by the end of the current Iranian calendar year (March 2021).

Referring to the importance of the Chabahar-Zahedan railway line, the official noted that due to its strategic position, Chabahar port is going to be a gateway for the country’s trade and developing this region’s infrastructure is a necessity to create more job opportunities and promote economic growth.

Establishing an all-rail corridor in the east of the country, connecting Chabahar as the country’s only oceanic port to the national railway network, developing Makran coasts through rail transportation, connecting Central Asia and Afghanistan to open ocean waters, creating a suitable platform for development and economic growth, saving fuel consumption and reducing road accidents, creating sustainable development and security in the region and establishing permanent cooperation with countries in the region and other countries with trade and transit exchanges are reported to be some of the goals of Chabahar-Zahedan railway project.

According to Khademi, transporting 927,000 passengers and 2.8 million tons of cargoes by the Iranian calendar year 1401 (begins in March 2022) is set to be the short-term economic goal of this project.

Connecting the ports to the railway network is an issue seriously emphasized and followed up by Iran over the recent years, as the country is strongly pursuing the objective of boosting exports and transit via its ports.

Chabahar Port in southeast Iran is the most prioritized one for railway connection as the port’s exemption from the new round of the U.S. sanctions on the country is an opportunity for the development of export, transit, and also transshipment.

Lying on the coast of the Gulf of Oman in Iran’s southeastern Sistan-Baluchestan Province, Chabahar is the country’s only oceanic port and given its strategic location in the International North-South Transport Corridor (INSTC) development of the port is of high significance for Iran.