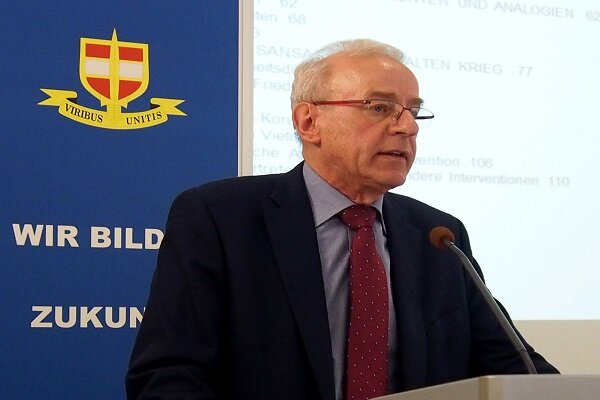 TEHRAN – Heinz Gartner, an Austrian professor in the Department of Political Science at the University of Vienna, tells the Tehran Times that the rejection of the U.S. resolution in the United Nations Security Council proved that the international community cannot accept “certain policies of the U.S. anymore”.

The United Nations Security Council on Friday resoundingly rejected a bid by the United States to extend a global arms embargo on Iran. Washington got support only from the Dominican Republic for its resolution to extend the embargo indefinitely. Eleven members on the 15-member body, including France, Germany, and the United Kingdom, abstained. Russia and China strongly opposed extending the 13-year ban.

The ban is due to expire on October 18 under a 2015 nuclear deal signed between Iran and the 5+1 group (Russia, China, the U.S., Britain, and France plus Germany). However, the U.S. officially quit the deal in May 2018.

“In history, pressure and sanctions in many cases lead to authoritarian developments and even war,” Austrian professor says. To explore various dimensions of the UN Security Council decision, the Tehran Times had an interview with Prof. Heinz Gartner, who chairs the Strategy and Security Advisory Board of the Austrian Armed Forces and the Advisory Board of the International Institute for Peace (IIP) in Vienna.

The text of the interview is as follows:

Q: The United Nations Security Council has rejected a U.S. resolution to extend an arms embargo on Iran that is due to expire in October. What is your take on it?

A: It was no surprise that the resolution was rejected. Surprising was that only one state voted together with the U.S. in favor of it. All European states – Britain and France as permanent members, and Germany, Belgium, and Estonia – abstained. This means that they want to keep the JCPOA alive. For the EU, there is still a separate Arms Embargo until 2023 in place.

Q: Do you think the rejection demonstrated the U.S. hegemonic power in the world is declining?

A: This presumption is too far-reaching, although the U.S. has lost its international reputation because of its failure in handling the COVID-19 crisis. However, the rejection shows that certain U.S. policies are not acceptable for a large part of the international community anymore. When U.S. Secretary of Defense Mike Pompeo yesterday (Friday) visited Vienna, other differences between the EU and the U.S. became visible. These are U.S. sanctions against the Nord Stream gas pipeline from Russia to Europe and the 5G network, and the U.S. withdrawal of the Paris climate accord.

Q: How do you analyze the role of other powers, specifically China and Russia, in this story?

A: It was expected that China and Russia would not let the U.S. get its way easily. The new thing is that other big states are becoming more and more skeptical, as well. This does not mean, however, that these states automatically side with Iran. In many ways, they are critical of Iran’s policies as well. Especially the Europeans do not want that Iran reduces its commitments to the JCPOA.

Q: How do you assess Trump’s maximum pressure campaign on Iran?

A: From the U.S. perspective, the “maximum pressure” was insofar effective because it contributed to the deterioration of Iran’s economy. It was not “successful” because it did not lead to “regime change” in Iran what the hawks in the U.S. administration hoped for, and it did not even bring a substantial change of Iran’s behavior what the U.S. wanted to achieve. In history, pressure and sanctions in many cases lead to authoritarian developments and even war. This means that the U.S. should change its behavior towards Iran.

IAEA should be impartial and professional: Zarif